Beyond The Bunny Series

When I taught Sunday School, I came across a really special way to teach the lessons of Easter to the kids.  Resurrection Eggs!  They come in a carton and contain a dozen plastic eggs, all of a different color and each containing a small trinket which symbolizes a part of the Easter story.  There is also a corresponding booklet with Scripture verse.

When the eggs are opened in a specific order, the children discover the wonderful story of Jesus and the Resurrection.

Several weeks before Easter, we would gather the children and they would each take a turn opening one egg. Some would choose their favorite color, or we would go youngest to oldest, or after a time, they would know what was in each colored egg and want to open a specific symbol!

The blue egg contains the donkey which Jesus rides into Jerusalem on Palm Sunday on (or upon which Mary rides to Bethlehem on to give birth to Him).

The light purple egg contains the cup from which jesus drinks at the Last Supper.

The orange egg contains the praying hands which symbolize what Jesus was doing in the Garden of Gethsemane and where the guards found him.

The green egg contains the leather whip with which Jesus was whipped 39 times.

The light yellow egg contains the Crown of Thorns that was put on His head.

The yellow egg contains the nails that were used to crucify Him.

The light green egg contains one die that the soldiers used to gamble for His clothing.

The purple egg contains the spear that the Roman soldiers used to pierce His side.

The cream egg contains gauze which represents the linen fabric in which He was wrapped after His death.

The pink egg contains a stone which represents the tomb with the rock rolled away.

The light blue egg contains NOTHING!  Which represents the empty tomb and His resurrection from the dead.  (The kids love this one!) 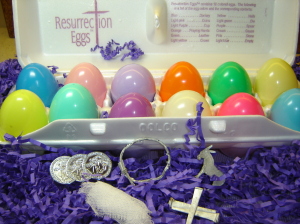 After doing it so many years with our Sunday School class, it has become a favorite in our home too, and a very easy way to teach the story and have kids tell it along with you!