Where Your Circus Dollars Go

Inside The Center For Elephant ConservationÂ®

By Debby Perry, Macaroni Kid of Pittsburgh LLC October 1, 2013
Elephants are pachyderms.
pach·y·derm  (pk-dûrm) n.
Any of various large, thick-skinned, hoofed mammals such as the elephant, rhinoceros, or hippopotamus.â€¨

I got to meet a family of these amazing pachyderms a few weeks ago.  More specifically, a few members of the largest herd of Asian elephants in the United States.  These beautiful "ellies" as Director of Coporate Communications Ashley Smith nicknames them,  inhabit the Ringling Brothers Barnum & Bailey Center For Elephant Conservation®. (RBBB CEC) in Polk County, Florida. â€¨

An opportunity of a lifetime.
The Center For Elephant Conservation is a private facility not open to the public.  If you’ve read much on line, as I have, you’ll read speculation & supposed first hand accounts that it’s designed this way to keep everyone from knowing the “atrocities that occur there.”  Without fail the CEC continues a steadfast focus on preserving the dwindling species of Asian elephants despite the continual activist allegations at every turn.

What's poetic?
The human caretakers surrounding, caring for and protecting these beautiful creatures- seem to have the thickest skin of all.  It's not a job that's easy in any aspect and I'd learn that first hand today during my visit.

Our small caravan rolled through a simple gate and parked. 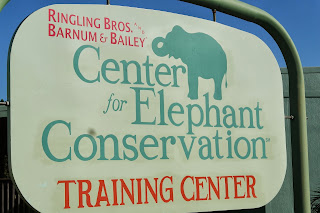 A large slightly weathered sign within the gates finally announced our location & a small modular style building was the first of only a few on the entire 200 acres of grounds.  The rest of the buildings, corrals and vast areas are dedicated to the elephants.  Surrounding the grounds are protected wetlands.

I looked up to my right and that’s when it hit me.  Where I was and what I was doing there. A massive elephant. Roaming in a VAST field laden with lush grass, trees, sand piles and shading. 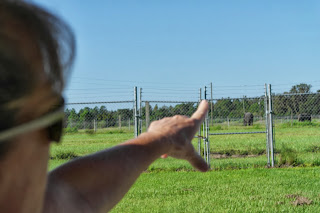 (Many of the grasses and treats are grown on the property.) 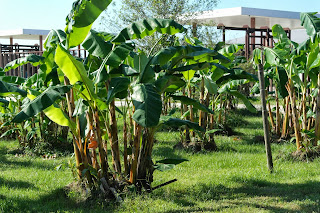 She plodded in slow-motion and it felt almost dreamlike. I learned later that she is 57 years old.  Far older than most in captivity.  A testament to the care she receives.  â€¨It was her own private preserve and one of several on the facility that I would see. I would imagine as an elder in the herd, it's where I would want to be as well.  It was an amazing site and only the first breath of what I’d get to see during my visit. â€¨

The CEC is a "Nursery for new generations as well as place for Asian elephants to grow up and grow old." says Janice Aria Director of Animal Stewardship, CEC.â€¨  By the end of the day I realized that was quite an understatment.   Throughout the day I met babies, mommas, aunts, grandmas, teen boys, old men and blue haired ellies. 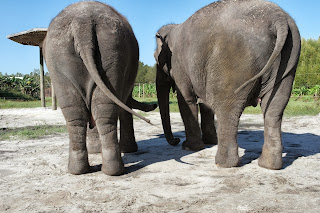 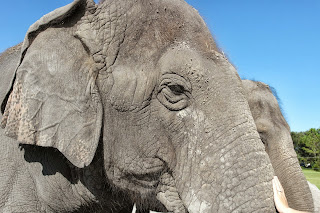 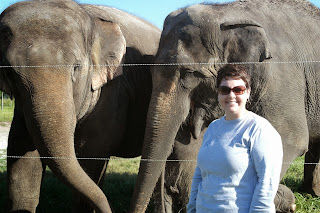 We were invited into the modular building we had passed upon our entrance.  Waiting to greet us were a few of the highest levels of CEC employees.  Director of Animal Stewardship, Janice Aria.  (herself once a Ringling clown) and Trudy Williams, Manager of Animal Stewardship.  If these were some of the highest officials of the CEC you would never have known it.  Both by their casual “field” dress and their attitudes.   It was indicative of the entire facility & team.  They had a purpose and it wasn’t to impress Joe Public.  The facility speaks for itself.

They welcomed us warmly and we got started with a mini presentation about the facility as well as the Ringling Brothers Barnum and Bailey Circus. No questions were off limits & in fact they encouraged questions & topics many times.  Their knowledge about both the elephants in their care and the Asian elephant,  was exponential.  These are people who have for years, lived and breathed these creatures.  People who have welcomed 26 calves (one, Barack, of artificial insemination- a feat in and of itself) and who have seen the retirement and even passing of some beloved elephants in the herd.â€¨

After the presentation and informal greetings we hopped on a few golf carts and began an impressive tour of the grounds & buildings. 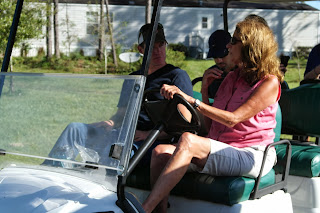 This facility is entirely grass roots.  Like parenting, there are certainly no manuals for building an Elephant Conservation Center and through the years they’ve honed their craft only getting more precise in their abilities.  They aide in studies that are shared worldwide and their conservation efforts are cutting edge boasting 4D ultrasound technology and attempts at artificial insemination methods that will literally blow your mind. Not only are they preserving for the future, they indeed are building the next performers for the Ringling Brothers Barnum and Bailey Circus.

I saw many, if not most of the areas of the facility. 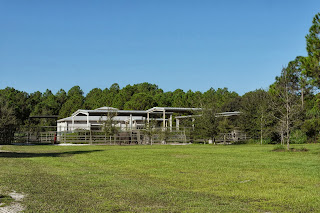 The areas ranged in set up depending on which type of elephants were housed for the moment & depending on their temperament and needs at the time.â€¨â€¨ What drew my attention most was the sheer “pristine” nature of EVERY area and it wasn’t staged. 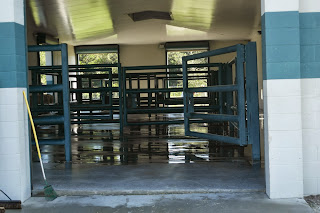 â€¨â€¨You can't hide neglect.
You can’t cover up 15 years of miscare.
This place was IMMACULATE.

Nothing run down.  Not a piece of hay out of place.  It was phenomenal.  It didn’t even SMELL.  I can't say the same for the elephant exhibits I've visited in varying zoos nationwide. I commented on how clean the facility was and Aria responded, “Thank you so much for noticing. I really appreciate that.”

It is evident that they take pride in what they do across the spectrum.   From its daily grind, poop-n-scoop upkeep, to it’s incredible studies shared world wide.   Everything is done with commitment to detail and the elephants health, temperaments and seeming trust of humans speak for themselves.  The elephants are their greatest spokespersons if you ask me.

â€¨â€¨We discussed so very much during our visit that it was absolutely overwhelming. I came away with vast knowledge (that I’ll share in the final installment of this series) about the Asian elephants, a deep appreciation for their dying species as well as a different perspective about the circus than when I first stepped onto the grounds.  I left realizing that I too cared.  That I should care.  That you should care too.  That we should ALL care. They are disappearing in their natural environment.

From the World Wildlife Foundation:
“The main threat facing Indian elephants, like all Asian elephants is loss of habitat, which then results in human-elephant conflict. In South Asia, an ever-increasing human population has led to many illegal encroachments in elephant habitat. Many infrastructure developments like roads and railway tracks also fragment habitat. Elephants become confined to “islands” as their ancient migratory routes are cut off. Unable to mix with other herds, they run the risk of inbreeding. Habitat loss also forces elephants into close quarters with humans. In their quest for food, a single elephant can devastate a small farmer’s crop holding in a single feeding raid. This leaves elephants vulnerable to retaliatory killings, especially when people are injured or killed.”

I left the CEC feeling intently confident that every elephant on the facility was being treated with the utmost of care and their efforts on our home soil to continue conservation, are indeed valuable.  â€¨â€¨This is where your circus dollars (and the like) go.  Like it or not.   The amount of money, time, knowledge and effort FELD Entertainment provides to preserve these species, is unfathomable.  For all the millions FELD must make on entertainment-- much of it must be poured back into this 5 million dollar private facility.  Each elephant costs approximately 60K to care for annually.

â€¨â€¨For some, no matter what level of incredible, top notch, round the clock veterinary and animal  care afforded to these creatures in the RBBB family-- it will never be enough. For others, it will be enough to know that the animals are deeply loved and that their care from start to finish, is a firm commitment of Feld Entertainment.

With every circus stop thousands of people get the opportunity to see, learn about and fall in love with the Asian elephant.

After my visit to the CEC, I’d have to agree.

This is article 2 in a series of 3 articles written by Debby Perry, Macaroni Kid of Pittsburgh LLC regarding a visit to the Ringling Brothers Barnum & Bailey Center For Elephant Conservation. You can view article 1 here.    You can also view my CEC photo album on FB.  disclosure*  While Feld Entertainment invited a select group of bloggers to visit the CEC and provided transportation, no compensation was received nor write up expected.  All opinions expressed are my own.
ADVERTISEMENTS